Dreamland for Kemp as Law strikes gold at Stratford

“This is dreamland!” admitted David Kemp after saddling Law Of Gold, owned by himself and wife Imogen, to win the pointtopoint.co.uk John Corbet Cup in the hands of Dale Peters.

David usually has a plan of campaign mapped out for his horses at the start of the season, but this was one occasion on which he changed his tried and trusted method. "It was a last-minute decision to try to qualify him for this," revealed the trainer, "and it meant having to run him in an Open a bit sooner after his previous outing than I would have liked."

It was a first attempt over regulation fences for the six-year-old, whose jumping was "class," reported Dale. The only moment of anxiety came when, with a circuit to travel, he jumped into the back of Casey Jem, after which Dale moved to the outside to keep clear of that less-than-fluent rival.

Law Of Gold was carrying the blue and green check colours worn to victory by David himself on Cantarinho in the same race in 2004. "They belonged to my grandmother," he explained, "and they hadn't been used since then until a couple of years ago."

Success has become a regular occurrence for the Norfolk yard at this end-of-season fixture, with victories for Moroman in 2015, Curraigflemens in 2017 and Caryto des Brosses last year, which proves that the advantage of having modern training facilities is not necessarily the key to achievement. David relies on neighbouring farms for gallops, which are not available in early season, so there is no temptation to prepare his charges for a long and arduous campaign.

Law Of Gold was purchased two years ago from Sean Doyle's Monbeg Stables, of which David is a regular client, with the proviso "Send him back if you don't like him." "Sean knows what suits us," said David, who has recently purchased a four-year-old with the same condition attached.

Dale recorded his 100th career success at Garthorpe three weeks previously, and his 23 victories between the flags in 2018/19 have put him in ninth position in the Men's championship.

Trainer and jockey were strongly fancied to complete a notable double with Caryto des Brosses in the Pertemps Network (Horse & Hound) Cup, but were mugged in the final strides by Sam Waley-Cohen on Wonderful Charm. 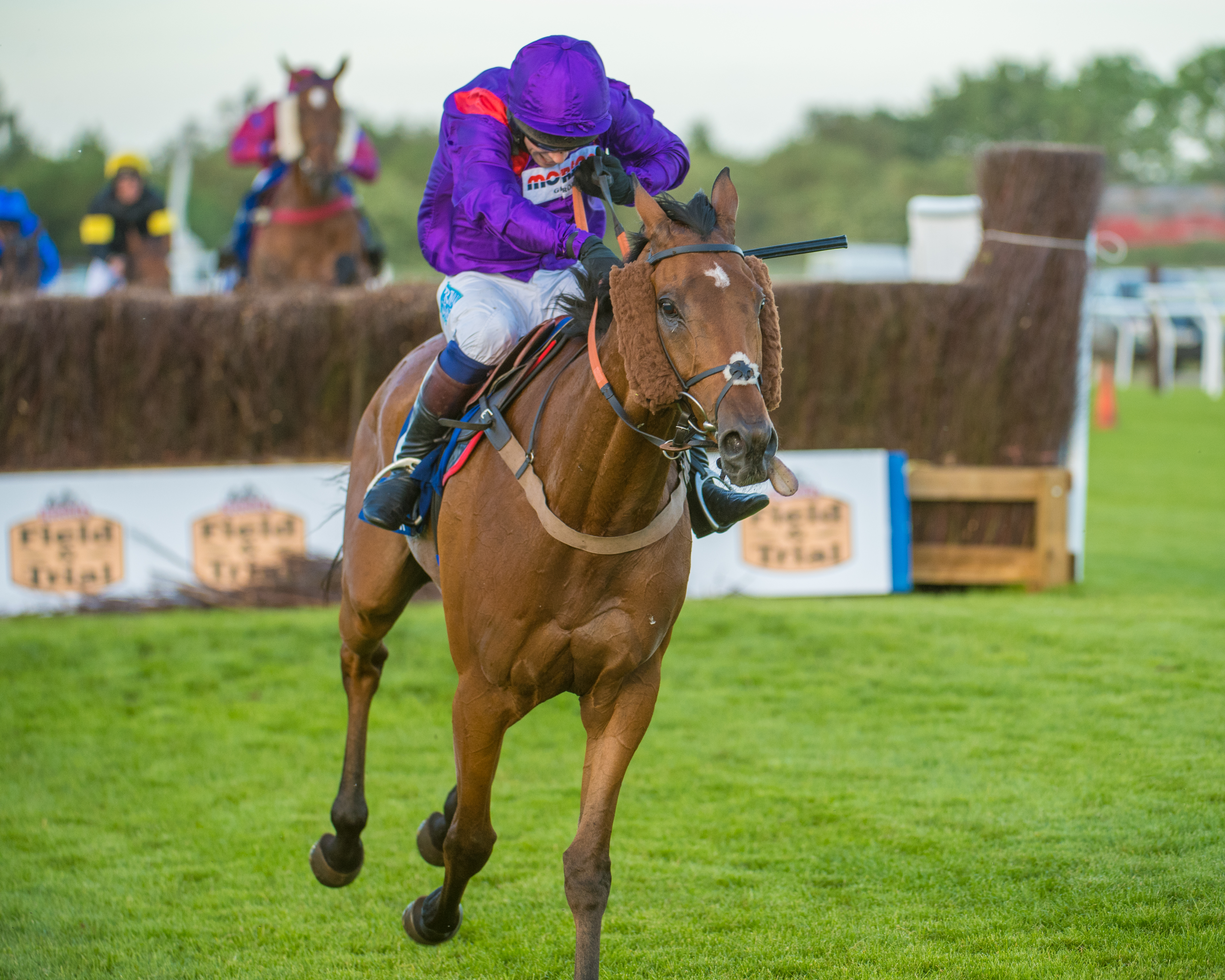 It was nearly four weeks since Sam, for whom business takes precedence over racing, had last race-ridden, and Wonderful Charm, who had finished third in this contest for the past two years, did not make life easy for his rider, coming off the bridle and needing pushing along at regular intervals. "That was hard work," smiled Sam, adding "He's a willing partner when he decides he wants to do it, and luckily in the last 100 yards he did."

The 11-year-old, who is owned by Sam's father Robert in partnership with Robin Geffen and Sir John Ritblatt, has been in Paul Nicholls' yard since his four-year-old days. The trainer, who was at the Bath & West Show in his capacity as a sponsor, was represented by his assistant Harry Derham. "He's a very difficult horse to keep right, and Paul has done an unbelievable job with him," Harry emphasised.

The son of Poliglote is mostly ridden at home by Natalie Parker, who herself has enjoyed a successful Hunter Chase season in the saddle.

It was a second successive narrow defeat for Caryto des Brosses, who had only lost out in the Timico Gold Cup due to Alex Edwards's transgression of the whip rules on Hazel Hill. "Dale said he didn't give him quite the same feel as at Cheltenham, but the way he travels it wouldn't notice," said David, who was of the opinion that his charge had not quite got home over the extended distance.

Daniel Bourne had no complaints with the performance of third-placed Asockastar, who had Wonderful Charm behind when finishing runner-up in the corresponding contest 12 months previously. "We were hoping to be in the first four so I'm over the moon," he commented. "I thought we had a chance two out, but the others quickened away." It was a final ride as an amateur for Shane Quinlan, who is commencing a second stint as a Conditional, having ridden eight winners in that role a few seasons previously.

Another rider shortly to join the paid ranks is Bryan Carver, who steered the odds-on Earth Leader to victory in the Llewellyn Humphreys Restricted Point-to-Point Chase. The well-known yellow and brown colours of owner Roger Penny have been in the winner's enclosure on numerous occasions, but Point-to-Point aficionados will best remember Earthmover, partnered by Rilly Goschen to take the 2004 Cheltenham Foxhunters' Chase. 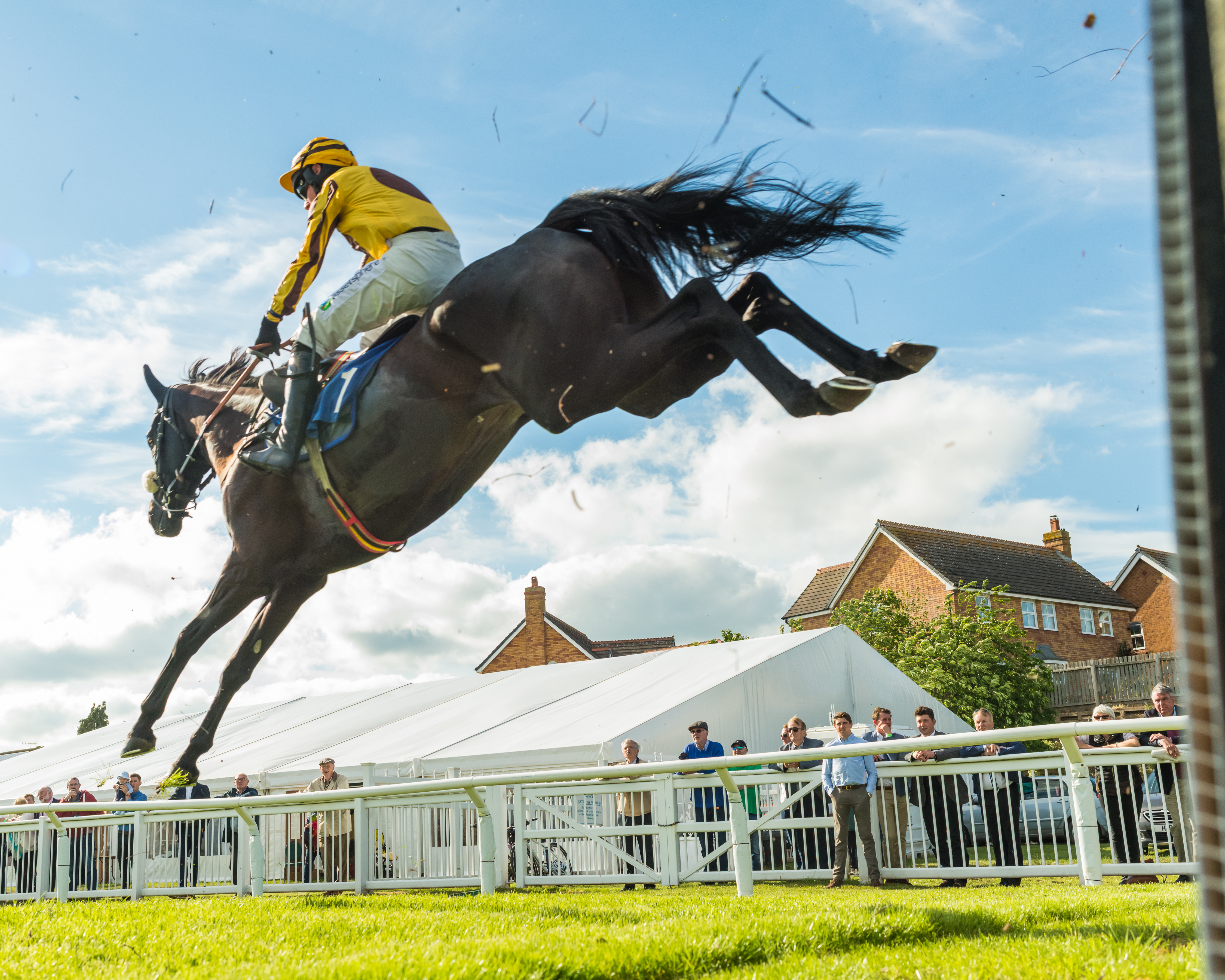 Earth Leader was bought by Paul Nicholls in 2017 from the late Graham Roach's dispersal sale, but getting him to eat was a major problem and he lost his way. Since moving to Rose Loxton last autumn he has improved with every outing. "He's still a big baby," said Rose, "but every time we've asked him to step up he's done so."

The son of Presenting was responsible for breaking Rose's leg in a gallops accident in early season but, she pointed out "He probably saved my life." While in hospital, Rose was diagnosed with the early stages of ovarian cancer, for which she is currently receiving treatment.

There would be no worthier winner of a training award of the season than Gareth Moore, who, aided and abetted by his girlfriend Sam Bailey and his father John, has brought back Risk A Fine, successful under Rules for Philip Hobbs, to winning ways after a three-year absence. 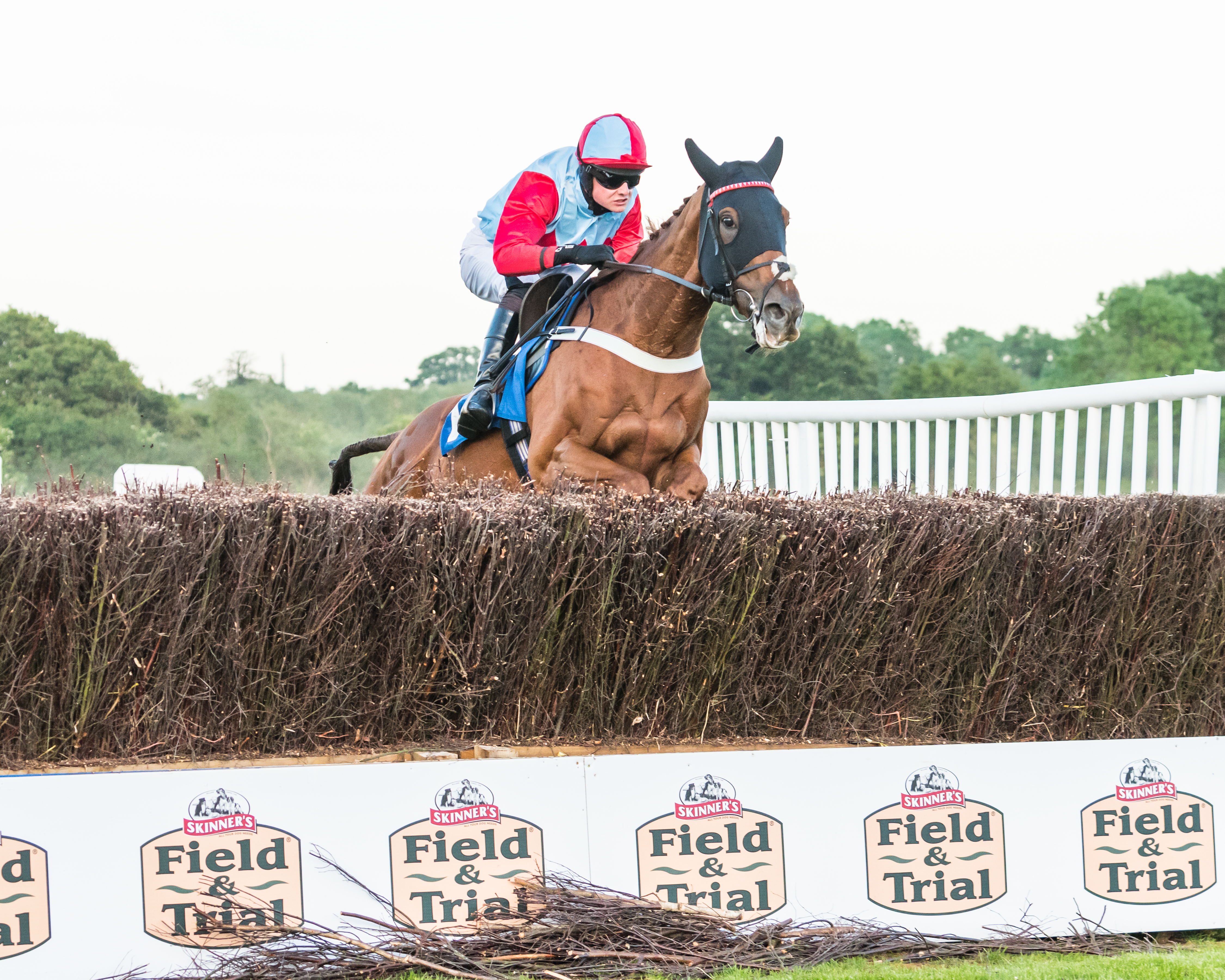 The chestnut was bought in 2016 after breaking down on two legs, for £1800 by Steve Whistance. "He walked round the ring four times and I thought I was going to get him for £400, but then someone else bid for him," recalled Steve, whose main problem now is when Risk A Fine is turned out in the summer – "He's terrible to catch!"

Since his purchase he has also thrown two splints, but his Stratford triumph in the White Swan Hotel Handicap, in which he carried the welter burden of 12st7lb, was his fifth of the season. In all his outings this year he has been partnered by the accomplished James King, who put his Cheltenham defeat down to a combination of the undulating track and the soft going.

"I hope it's not another five years since I'm stood here," grinned Gareth, who saddled Universal Soldier to take the AGA Ladies' Final at this fixture in 2014. Perhaps he was optimistic of success on this occasion, as when he went to receive his trainer's prize his colleague Justin Hoskins pointed out "He's got his best jumper on!"

There was another excellent training performance from Justin Landy, one of the sport's most able and respected handlers. The former Seamus Durack inmate had been sidelined for 18 months before making his debut for Justin at Askham Bryan College in March, and his success in the Skinner's Ladies' Open Championship Final was his fourth in as many outings.

It was an emotional day for jockey Becky Smith, who gave Meldrum Lad a peach of a ride to land the spoils, coming with a perfectly-timed run up the inside on the final bend to lead at the last and stay on strongly. Becky is assistant to trainer Micky Hammond, whose yard is still reeling from the sudden death, a week earlier, of 17-year-old team member Tim Jones, while it was also 14 years to the day that Becky lost her mother. 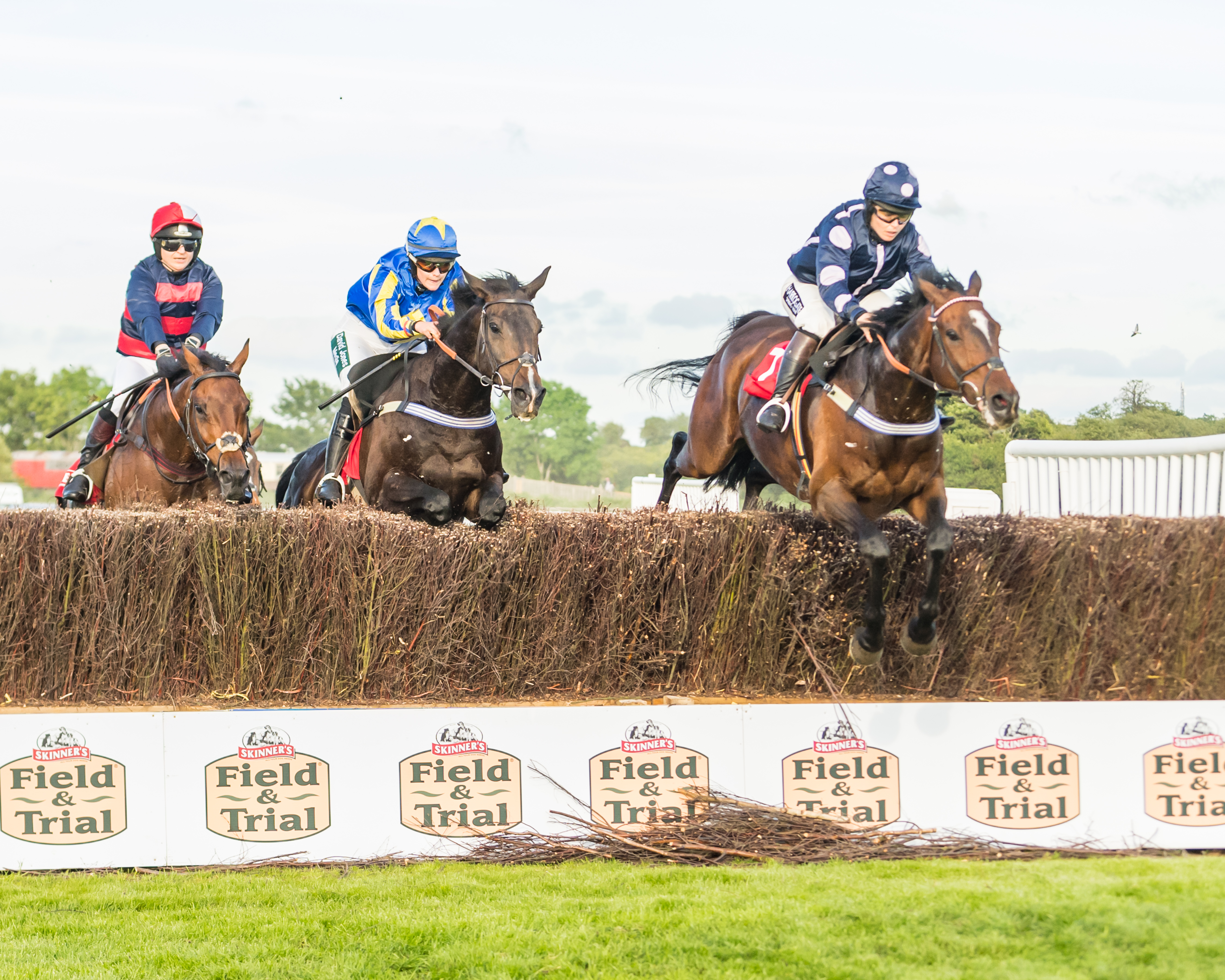 Becky rode for three seasons in Irish Points, but apart from two rides in the Yorkshire area last year she has concentrated her efforts on Flat and jump racing under Rules to good effect. She is the reigning Ladies' Amateur Flat champion, and now has 40 winners under her belt.

She was persuaded by Justin, who is farrier to trainer Mark Johnston and who trains Meldrum Lad for his mother, Pauline Southerington, to take out a licence in order to ride the ten-year-old with this target in mind. Justin, who also saddled the third home, Seefood, was quick to deflect credit for the success to his partner Courtney Tinkler, who is responsible for doing the work with the winner.

Pauline was looking forward to watching the re-run of the race, not having seen much of it. "I hid!" she confessed.

"This is a massive shock – I'm gobsmacked!" was Fred Hutsby's reaction to Downbythestrand's victory in the Sheldon Bosley Knight Chase, run over 2m1f. "He didn't get home over three miles last time, but I thought this would be too sharp for him." 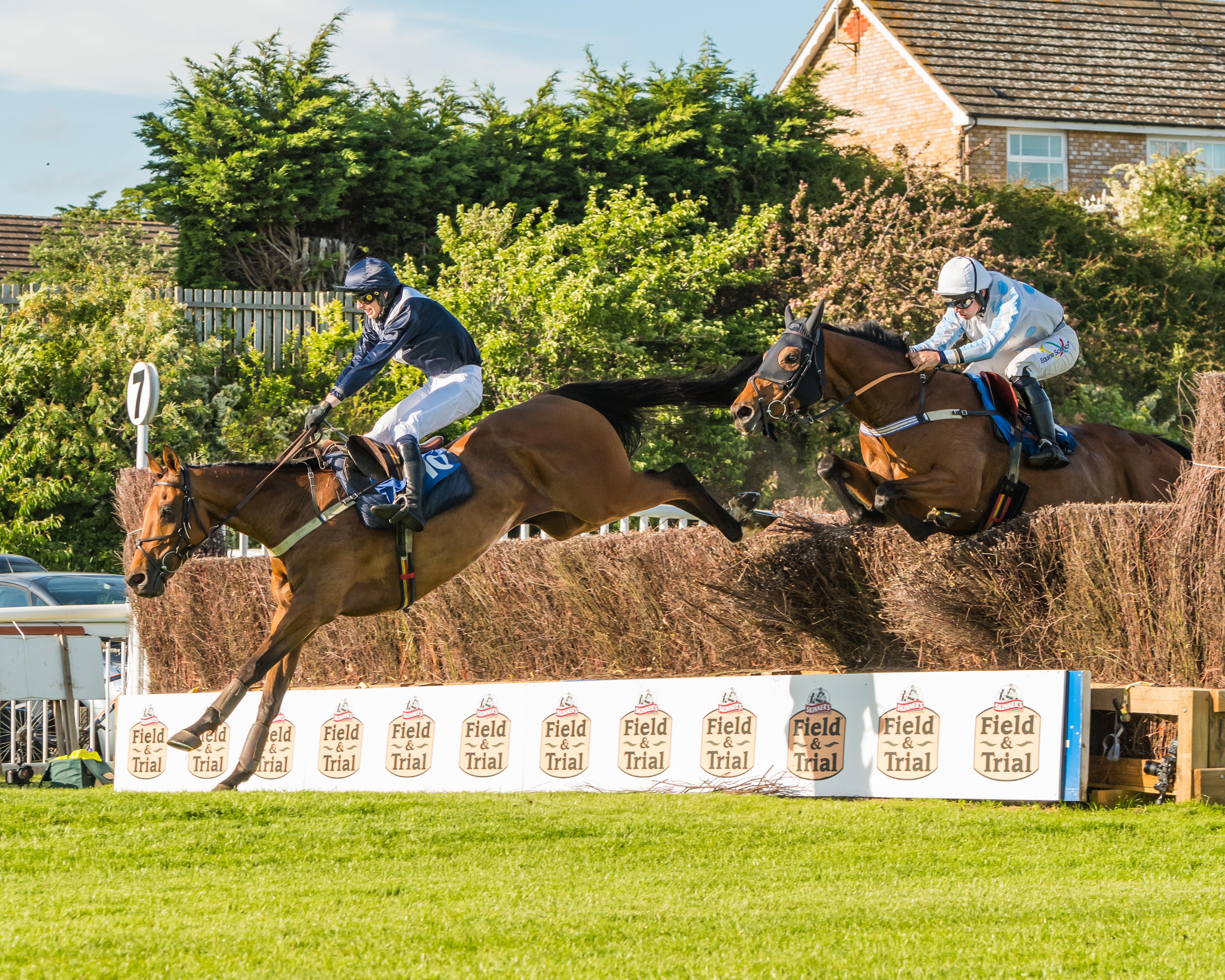 Downbythestrand, bought at Doncaster in 2015, is another horse who has had long periods of absence from the track. "He's so fragile," said Fred, "and Mark (Osborne) has been so patient."

Living just a stone's throw from Stratford, Fred, who on his own admission, has had "a terrible season," was able to leave the yard less than two hours before the race, but even so, due to traffic congestion, he had to contact jockey Will Thirlby to ask him to declare Downbythestrand.

"This is a dream come true," declared Will, who celebrates his 20th birthday later this month and for whom it was an initial success under Rules. His good form in the saddle continued the following day with victory on Midnight King at Garthorpe for handler Julie Wadland, his first ride for that stable. He has recently joined Alan King's yard at Barbury Castle.

The concluding Bumper – in which the favourite Equus Gold failed to last home – sponsored by Irish Thoroughbred Marketing, did not look, on paper, the strongest of contests, which was perhaps borne out by the victory of Sue Davies' Love Around, whose record between the flags amounted to one success from 12 starts. 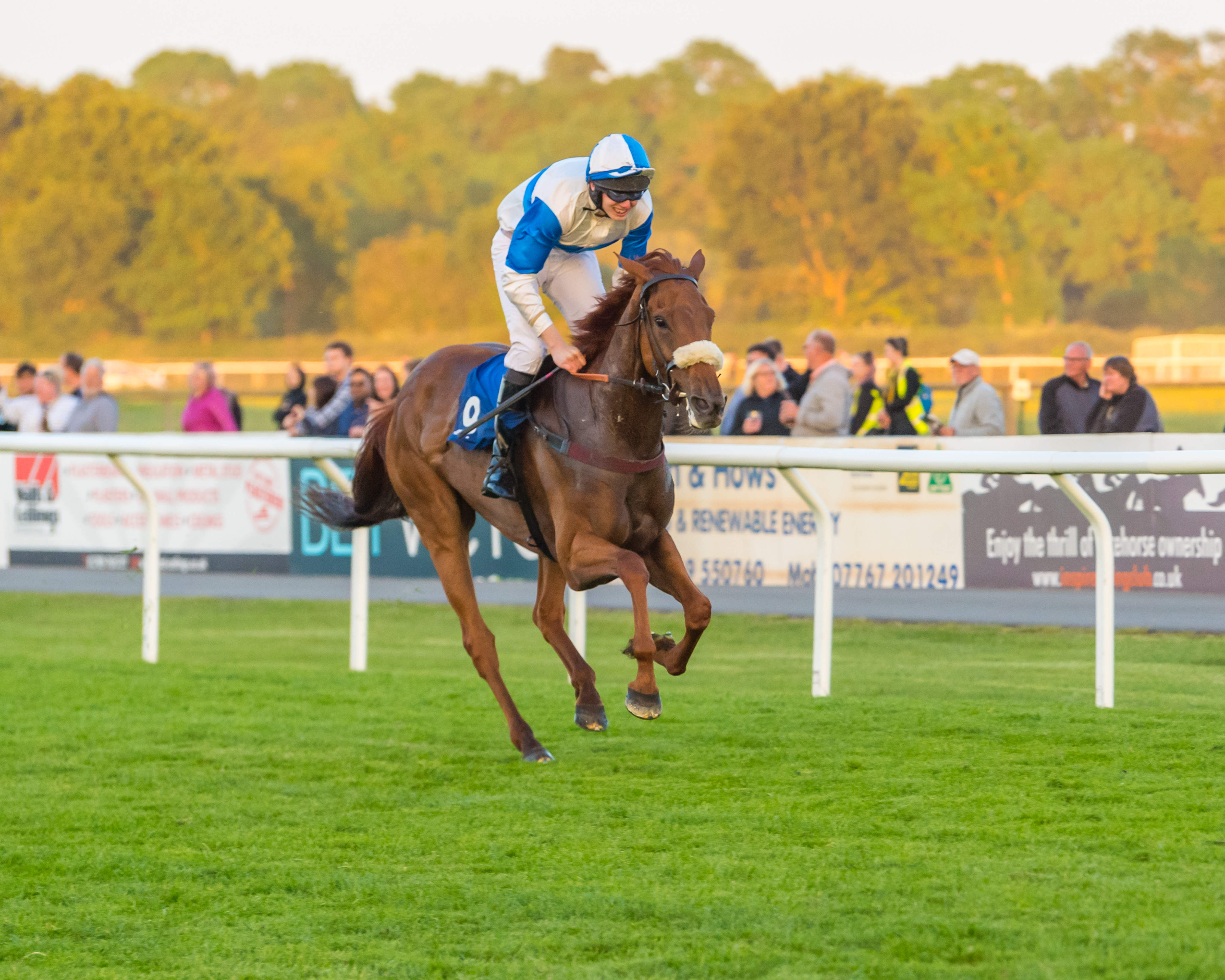 It has been a very quiet season for the mare's trainer Sheila Crow, who had only four horses in her yard this time, although she said she is hoping to build up the numbers again next year. Love Around, who was partnered by her grandson Henry, 18, was bred by the latter's mother Caroline.

Held up early, the chestnut quickened clear in the final furlong to score very comfortably. "She's only got one big run," explained Henry, "so it needs timing just right."

An 'A' level student in London, Henry is shortly due to take his final exams in Physics and Economics, and in the autumn will be going to University.

During the evening presentations were made to the winners of the National Hunt Amateur Championships, David Maxwell and Tabitha Worsley, and to the runners-up, Sam Waley-Cohen and Becky Smith.

David is currently grounded with a fractured spine and punctured lung incurred in a recent fall in France. In addition to retaining his title, his wish list for next season includes a Foxhunters' success, but he is not counting his chickens. "It would kill me to have to give up, but if the medics think it best I'll be guided by them," he said.

It was in November 2017 that Tabitha was hospitalised with a broken back, but amazingly she returned to action just three months later. This year she hit the headlines when she won the Aintree Fox Hunters' Chase on Top Wood for trainer Kelly Morgan, and it was to Kelly and her sister Laura, who have provided the majority of her winners, that the jockey expressed her gratitude for their support.