Robin Tate enjoyed a long spell as a jockey, which lasted from 1953 until 1998 and comprised “about 130” winners in points and under rules (he admits to not keeping an accurate record). The best-known horse he rode was subsequent Grand National winner Mr Frisk and he now trains five pointers near Thirsk in North Yorkshire, including the useful Absainte, third at Cheltenham last season. His daughter Fiona Needham’s career stretched for twenty years before resuming briefly, after a hiatus, a decade later and she had 80 successes between the flags and 36 on professional tracks. However, Robin’s greatest training success – and Fiona’s highlight in the saddle – was their home-bred Last Option’s 2002 victory in the Cheltenham Foxhunters (wearing her father’s old and torn jumper!)

As well as helping Robin with the pointers – she plays a hands-on role in the training and can often be found leading up – Fiona is General Manager and Clerk of the Course at Catterick. She is also PPSA Area Chairperson for Yorkshire and has just been elected to the PPA Board as a welcome female (and Northern) representative. I went to find out about their illustrious careers and to see how Fiona intends to shake up the sport!

Robin has been master of Hesketh Grange, high on the North Yorkshire moors, since 1962 and – at the age of 82 – still rides out every day, as well as schooling his horses occasionally. "Horses have been my life," he confirms before he and Fiona work Absainte and Sine Nomine up the grass bank behind the farmhouse. "Most people learned to ride a bike but I had a pony – I'd ride it to school, and leave it in the paddock across the road during class." 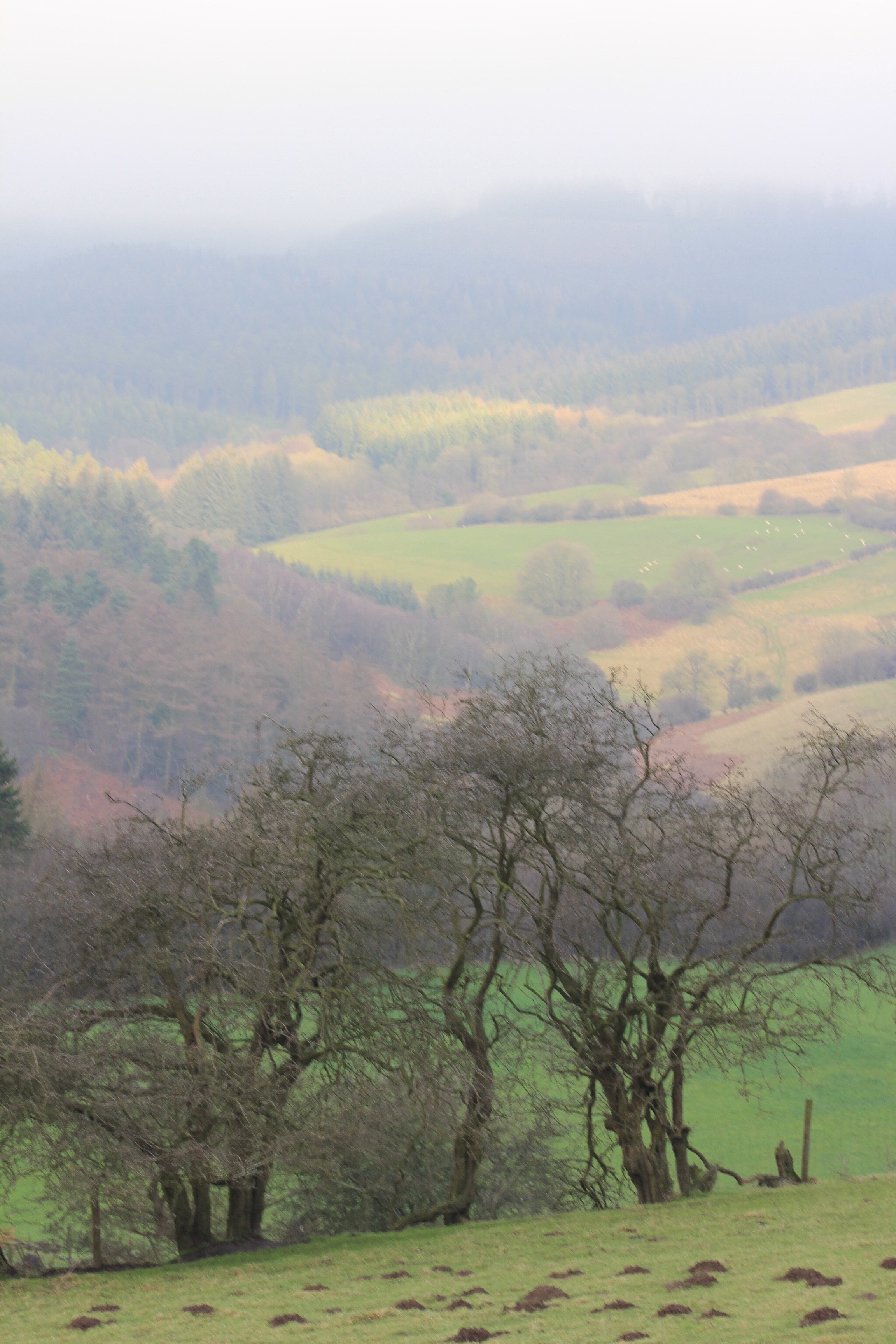 He admits to being a farmer first – he has "70-80 head of cattle and 200 breeding ewes" – and a trainer second. "If he buys too many more, I'll be back to mucking out," groans Fiona, but Robin is keen to play up his daughter's role on the horse side. "We have to finish at 8.30 every day so she can go to work," he laughs. "Seriously, Fiona does most of the race planning and is more or less boss with the training. She can see a problem before it occurs – she'll say, 'It didn't give me a good feel', I'll think 'Bullsh*t' but she's invariably right! She'd be a good trainer, but she wouldn't make as much money as she does now!"

Robin's career in the saddle began with a third in the Hurworth Hunt race at Leake in 1953, on his Golden Plover. "He was basically a hunter, but you didn't get rides in those days unless you had your own horse and – if it went lame – you had nothing to ride." Which is why it took Robin ten years, after "Lots of placings", to ride his first winner, Emboy, at the Bedale in 1963.

Of his own horses, Robin has the fondest memories of Europleasure – "He won me three Hunter Chases and was my only winner at Cheltenham. "However the best horses he rode were for other people. "The first time I rode Mr Frisk for Ralph Dalton, he was a hooligan. He walked straight through the first three fences so I pulled him up. I then set off again to school him and he jumped brilliantly. We won four points together. I also rode (useful chaser) Old Applejack and thought he was the better of the two."

Robin would probably have ridden more winners had he not struggled with his weight. "I was farming 300 acres. That was my living – you had to be strong to do it and I couldn't farm and starve at the same time. Fiona coming along was the best thing that happened, as I could pass on my rides to her. I was struggling to pass my medical as I had a heart murmur but they allowed me to ride for one more year so I could ride my last winner at 60." (He is too modest to mention his Easingwold four-timer at the age of 55 in 1993).

Fiona had her first ride in 1984, at the age of 16, at Charm Park, "On a safe conveyance called Royal Vine," and her debut winner the season after, on Waminda – another for Ralph Dalton – at Witton Castle. She lists her own Joint Account along with 2002 leading horse Upham Lord – "A nice spare when Jill Dawson broke her collarbone," adds Fiona understatedly – as among the best horses she rode, but they pale into insignificance compared to Last Option.

Fiona and Last Option enjoyed their first success at Hornby Castle in 1997 and the pair went on to score at Witton Castle in that debut season, before he went on to greater things as a six-year-old the following year. Two pointing wins preceded a debut Hunter Chase victory at Wetherby, and the season culminated in success in the John Corbet Cup. "He was popular in this area," Robin tells me proudly. "Two coachloads went to Stratford to see him run, because he was a proper local amateur horse – I bred him, and bred the jockey!"

Their crowning glory came at Cheltenham in 2002. Fiona: "We knew he was well but, at 20/1, he wasn't fancied. Dad didn't think the ground would suit and I thought he was right when I came off the bridle, but he travelled well going up the hill and two out, I thought, 'I've got to kick on.' I panicked and must have looked awful." But no matter how she looked, it was effective and Fiona and Last Option held by half a length. "I was stunned," admits Robin. "I didn't believe things like that happened to people like me. We were offered a lot of money after he won the John Corbet, but my wife told me that we weren't going to sell because we'd never have another like him. As Colin Tinkler said to me, 'It's a dream, and you can't put a price on a dream.'" 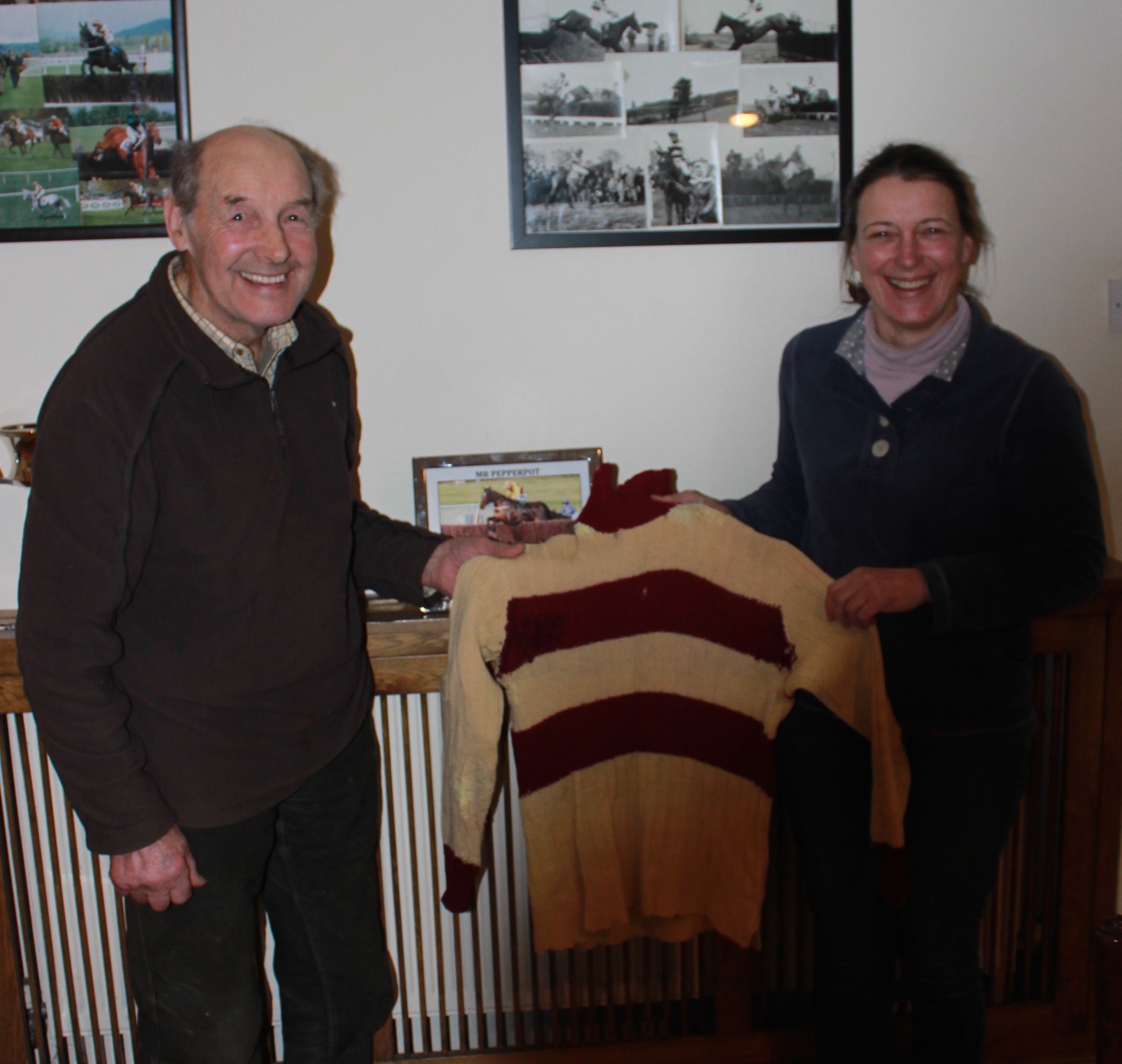 Fiona originally retired in 2003 and explains why. "I was living in Newmarket and was offered a Clerk of the Course role. Joint Account and Last Option had both retired, so it seemed the right time to get a proper job. But when I came back to Yorkshire in 2013, I got my licence back, to ride one in the Hunt race for Dad and enjoyed it, so kept going. But then I broke my leg out hunting the next year, so that was the end."

Given that their careers crossed-over by more than a decade, father and daughter inevitably rode against each other. "We fought harder to beat each other than anyone else," recalls Robin. "In her first season, at Dalton Park, she came up alongside me and I said, 'Take hold of his head.' Then I pinned her on the corner and said, 'Lesson number one: never listen to me! And I remember one day she was told to look after her horse but going down the hill, we were both flat to the boards. I flew the second last, she got buried and I'm still laughing about it now!"

Robin confesses that, if he had his way, he'd "Take pointing back to its roots. There aren't enough runners in Opens because millionaires can buy these 'push button' horses, which are killing the amateur sport. I'd stop highly-rated horses running in points and Hunter Chases." When Fiona objects, suggesting pointing offers a second career to former rules horses, Robin counters with, "They've had a lovely career – why should they dictate to the true amateurs and up and coming horses? I've seen plenty of young lads coming through who got sick of the professionals dominating and didn't bother any more."

Fiona's main objective – now she is on the PPA Board – is to give more opportunities for horses to progress through the grades in points. "I'm not against Maiden winners going to the sales," she explains, "But it's difficult to find opportunities once you get out of Restricteds. I'd like to allow horses to run in a second Restricted with a penalty, and I'd do away with Intermediates. And people like to see local horses and local riders, so I'd have more Area Conditions races." She is also keen to maintain the link between point-to-pointing and hunting. "If you don't," she fears, "Hunts will find other ways to make money and you won't have anyone to run the meeting. You can't make the horses qualify by hunting any more, but maybe the riders should…"

Given that Robin has been involved in the game for nearly 70 years, he has strong views on what has changed for the worse and better during his time. Inevitably, the advent of professionalism attracts his ire, as well as modern racetracks. "The new courses are little and gimmicky," he complains. "Only Charm Park and Hornby Castle (in the area) are good, galloping tracks that are great to ride on – you can win with a moderate horse on the others!" And for the better? "That would be difficult!"

Fiona has mixed views on increased professionalism in the sport. "The ground has improved, as has medical cover, and the standard of jockeyship. But it doesn't seem as much fun as it used to be, there are fewer 'have a go' riders and many of the top jockeys are just marking time until they turn conditional. And they're better jockeys, but not necessarily better horsemen."

My final question is simple: why do Robin and Fiona love pointing so much. "I think I like animals better than people," laughs Robin again. "I was thinking that this morning when the mares came up and nuzzled me. I just love horses." Fiona has the final word. "At least we agree on that!" 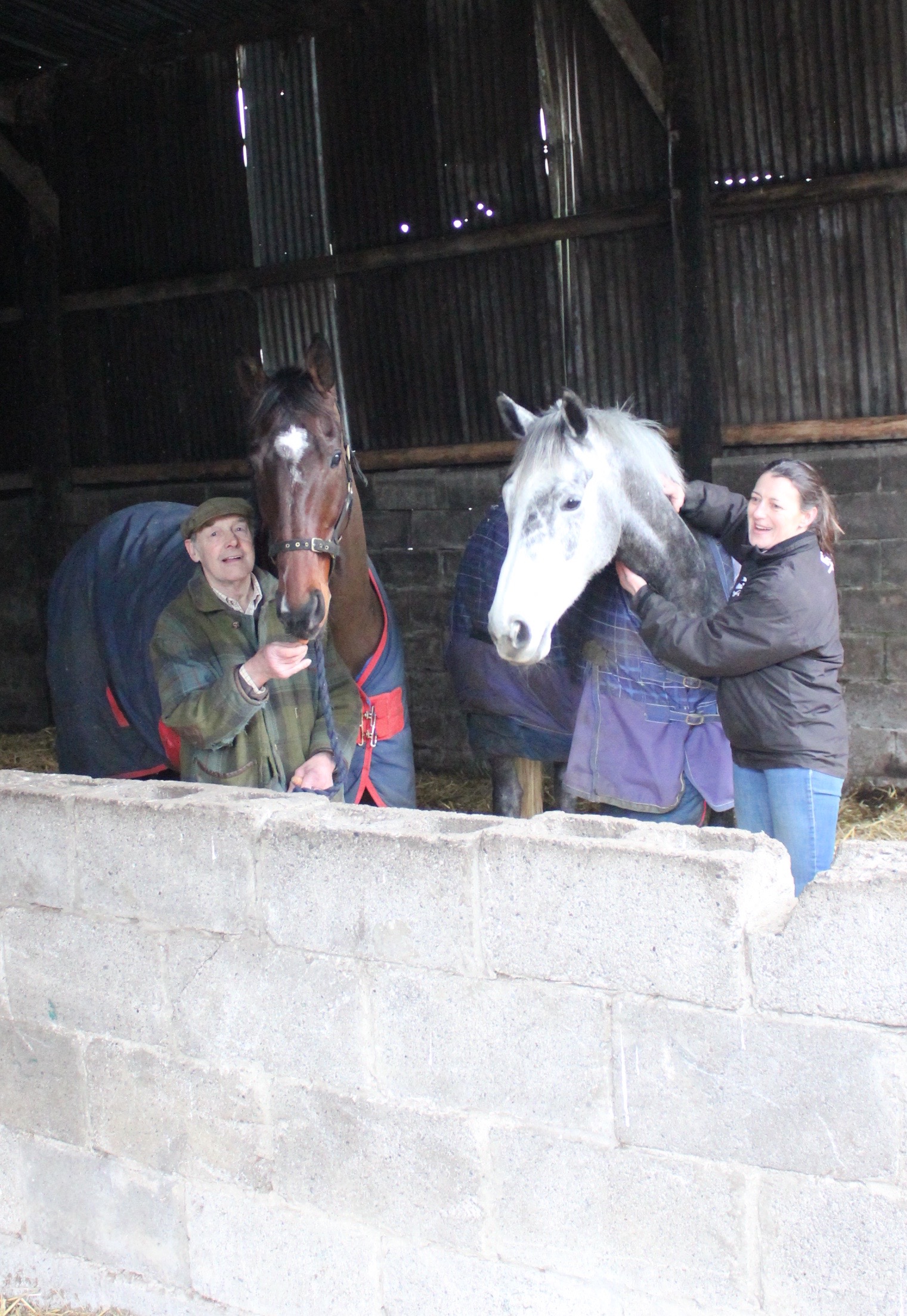 She'll start at Brocklesby Park and then hopefully go for a Catterick Hunter Chase. After that we'll see. She may go to Cheltenham again – but for a different race – but it depends on her owners. She's the only one we don't own ourselves.

An unraced homebred five-year-old by Grape Tree Road – the fifth generation of the family we've had. Her great-grandam is Chumolaori who we won races with and bred winners from, including Oh Mother – Fiona's favourite saying! Schooled well and may go for the Mares Maiden at Brocklesby Park.

Like Absainte, she's by Saint Des Saints. Just turned four and we think a lot of her. I'm not a fan of mares and fillies but we went to Doncaster and Dad said, 'I like that'. He couldn't be swayed and we bought her unbroken. She's schooled fantastically at Malton and the plan is to run her soon, maybe at Duncombe Park on Sunday.

He's my favourite. He's an old rogue, my ride and I still school him. Harvey Smith gave him to us and at first I thought he'd smash the trailer to bits, so we have to take him to the races with a companion. Won at Alnwick, a short-head second at Friars Haugh, may go for the Confined at Duncombe Park and we might send him Hunter Chasing as he's a fantastic jumper.

We think quite a lot of him and he ran well when just touched off at Charm Park then hit the front too soon at Witton Castle but was awarded the race. He was coming to hand early but was kicked, which isn't a bad thing as he doesn't like the mud – I know he's alright now as he bucked me off the other day! Will probably start at Charm Park.