Teresa Clark, like many of her horses, has an impeccable jumping pedigree! Daughter of former trainer John Honeyball – who passed away late last year – brother to current handler Anthony and sister-in-law of former champion lady point-to-point rider Rachel Green, she trains a small string of pointers herself, at Spaxton near Bridgwater in Somerset. Teresa’s alumni include Our Chief, the popular grey Subtle Sovereign and mercurial Bathwick Scanno, while her current standard-bearer is the improving mare Tuff Nano. Charm personified, Teresa is obviously able to work her persuasive magic on jockeys as well as horses, as half her winners these past two seasons have been ridden by Will Biddick!

As I arrive at Culverwell Barn, where she has trained since 2014, Teresa and Reuben Marshall are saddling up the two mares Tuff Nano and new arrival The Kitchenmecanic. My first task, as we climb a steep hill behind the yard to watch the pair work, is to avoid Tuff Nano as she shies away from a tree and tries to buck Teresa off. "She doesn't like leaves," laughs her unfazed trainer. "I call her 'enthusiastic', but she's actually naughty. I'm having a barn conversion done at the moment and she buried me recently in front of the builders. That just about sums her up!" 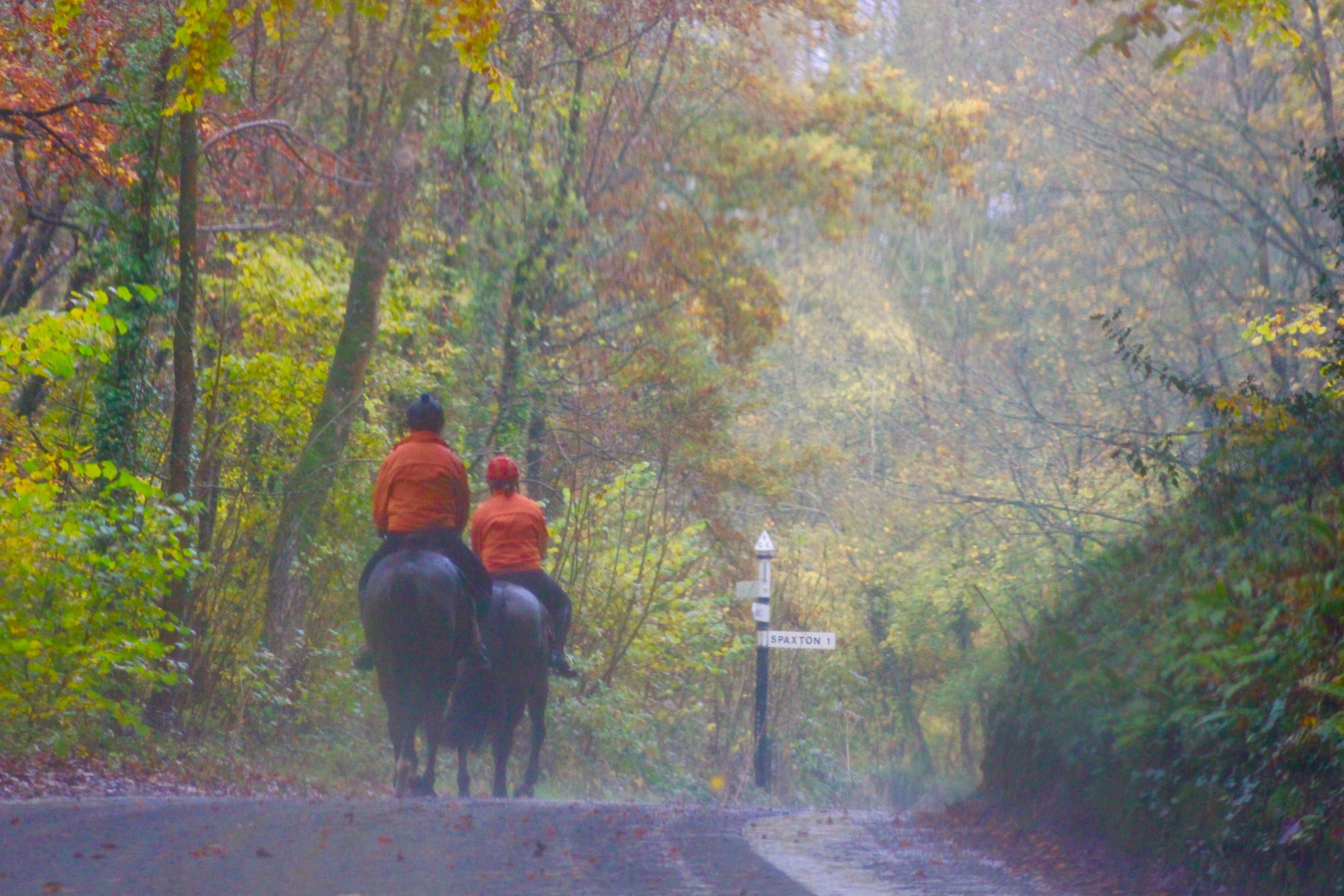 Work done and soaked through, we repair to the local Foxy Bean café for a well-earned hot chocolate and cake, and for Teresa to tell me her story. "I was born in Tetsworth, Oxfordshire, and brought up at the Attington Stud, from where Dad trained (1973 Cheltenham Gold Cup winner) The Dikler to win two points, then pre-trained him for Fulke Walwyn. When I was five, he bought a farm in Somerset – a mile from where I train now – which was his childhood dream and became Master of the Taunton Vale Foxhounds." Teresa doesn't remember a time when she didn't ride, and confesses, "I'd take days off school to go hunting and would choose what I thought would be the best day's jumping. Mum would get grumpy and say to me, 'You can't be ill every Friday!'"

Teresa progressed from the hunting field to race riding, mostly for her father under rules, as well as in point-to-points in her native Oxfordshire. "The highlight of my career as a jockey was finishing about ten lengths behind Sibton Abbey at the first ever Sunday meeting at Cheltenham," she smiles. "I rode some absolute rubbish… but I was quite good at getting them round. I learnt survival, and was competitive on the odd horse, but I think that – for a young jockey – it's better to sit on the sidelines than ride rubbish. You can only go on for so long on bad horses."

"When I decided to stop riding," Teresa continues, "I was working for Vic Soane at East Garston. He was giving up training and I knew Richard Barber was looking for staff. I rang him up and he told me, 'I've got enough Chiefs, but I'm looking for Indians!' but within a month I was schooling and – when his head girl left – I started doing her job. I just took to Richard. I fell out with him loads over training methods, but he was invariably right. And, while I took in lots at Martin Pipe's (where Teresa was secretary) and Vic's, it was Richard who gave me back my passion for pointing."

Along with her father – "His attitude was that everything is achievable and you have to kick on" – Richard, who also died in 2019 and for whom she worked for ten years, is Teresa's biggest inspiration. She relates a story that sums up his attitude to life. "I was using David Noonan but he couldn't ride a maiden for me one day at Cothelstone. I wanted Will Biddick to ride, but was nervous about asking him, so rang Richard for advice." His response? "If you want to be the best, use the best."

Another early ride the multiple champion had for Teresa was at Holnicote, on the first pointer she trained and her all-time favourite, Bathwick Scanno. "Scanno was frustrating," she recalls. "I knew he was better than he'd shown. I'd entered him in both the Novice Riders and Confined races but his syndicate of owners wanted to use Will, even though the latter race was more difficult. Will asked me 'Am I allowed to do what I want?' I said he was, but went he went off in front, I didn't know what to think!" (The pair made all and won by 40 lengths).

Teresa speaks fondly of how 'Scanno' came to her. "My younger son was nine months old and his father said, 'I think you should get a pointer.' I turned up at David Pipe's yard and looked at two horses. I preferred the other one, but couldn't afford him. Scanno was the size of a rabbit but he looked sound enough! He was Jamie Bargary's first ride and also his first winner, at Stafford Cross in 2012. We were going to hold him up as it was his first time over three miles, but he ran away with Jamie and got to the front early. My first winner left me wanting more – it was addictive, I wanted a double, then a Hunter Chase winner…"

That first Hunter Chase winner came on a big stage, as Teresa's Our Chief won the Subaru Restricted Final at Stratford in 2016. "He also came from David Pipe," Teresa tells me, "Although I did actually want him! He'd always shown ability but wind issues meant he didn't make it under rules. He travelled like a winner first time out for me, then stopped, so we gave him a soft palate operation before he won at Great Trethew. We went to Stratford because we had no other options, having given him time off after his victory at Littlewindsor and – while I wouldn't have been surprised if he'd been placed – I didn't think he'd win. I hugged owner John White like it was Cheltenham and everyone got drunk while I drove the lorry home. It was a nice way to end the season," she adds understatedly.

The Pipe connection apart, I ask Teresa how she comes by her horses. "People come to me," she says modestly. "I don't push myself." Former Ladies Novice champion Lucy Mager rides out for Teresa during the week while Reuben does weekends and holidays. Reuben, 16 – known to Will Biddick as "Rubs" – has been with Teresa for three years, having originally arrived on a work placement for his Duke of Edinburgh skills course. Teresa makes no bones about what an asset he is to her. "He notices everything," she says proudly. "I can go 'you know' and he knows! When I go on holiday, Reuben takes control." "I want to be a vet," admits the youngster when quizzed about his ambitions in racing. "I don't think I'm brave enough to race-ride!" 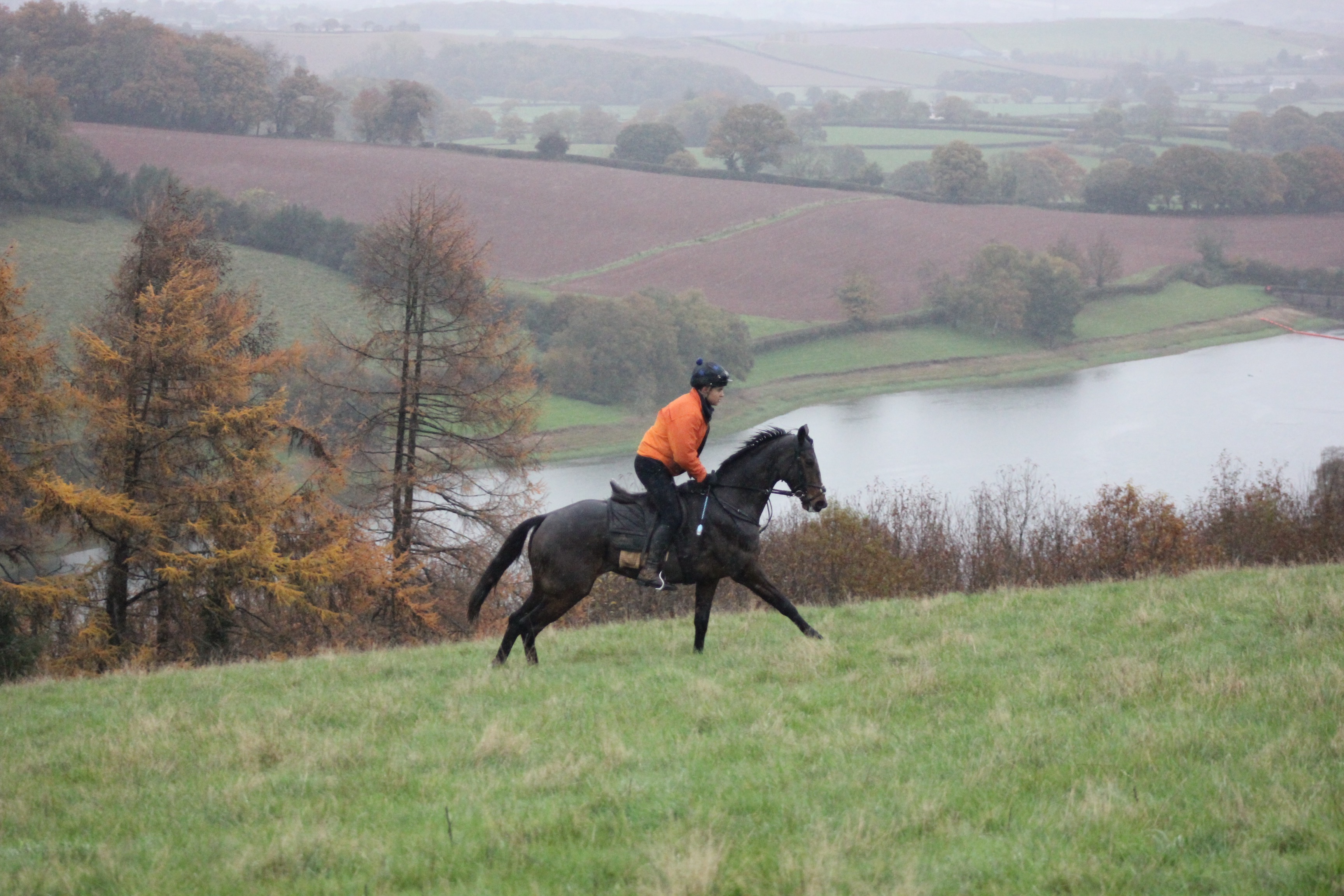 Teresa is gaining a reputation for winning best turned out awards, although is coy about revealing the secret of her success, telling me only. "I'm up at 4.30am doing manes and tails – I got that from Mum, Dad and Richard Barber. But we don't plait all our horses." She's again keen to praise Reuben. "He's meticulous. He chalks white socks and won't let a horse leave the lorry until it's spot-on." And it's not just in grooming that Teresa excels. "Last season was statistically my best, although nine winners is my highest total," she continues. "All my horses ran well." The figures back up her claim – she had a 25% strike rate and over 60% of her runners were in the first three.

Teresa shakes her head vigorously when I suggest she may want to take out a professional licence. "I'd like to have a decent Hunter Chaser, but I love my pointing too much. It's the social side – we have a great network here in Somerset and people look after each other. I have a lot of friends and want to see their horses win. Rules racing doesn't have the same spirit."

As talk turns to Teresa's views on the sport, she confirms she's a traditionalist. "I loved pointing when I was at Richard Barber's. Then, you qualified by hunting and you had more traditional Members races – runners didn't even have to be thoroughbreds. I don't hunt as many of my horses as I used to. It depends on the horse – Subtle Sovereign had to hunt the week he was running for his mental wellbeing! The new rules mean lots of people have forgotten about the hunts, but it's hunting people who give up their time – people criticise, but they're volunteers doing it for nothing."

Traditions aside, Teresa agrees that point-to-pointing has evolved. "I wanted to say it needs to go back to what it was," she admits, "But we need to move on and embrace change – because there wouldn't be enough pointers otherwise… I've caused waves over Members races, saying that a horse should have hunted to be eligible to run, but it's hard – it's better to have a Confined with five or six runners than a walkover." One innovation, however, of which Teresa is not a fan is the point-to-point flat race. "It's meant to be point-to-point steeplechasing," she explains. "The horses are supposed to be jumpers. I'm not sure all of the tracks are suited and some races have been falsely run."

Overall, Teresa is a fan of the way the sport of pointing has progressed in recent years. "There's more concern for the safety of both jockeys and horses," she confirms. And Clerks of the Course seek our opinions. It winds me up when people have a pop at them – they have a really hard job to get the going right." She's also a supporter of PPA Chief Executive Peter Wright. "He cares about peoples' opinions and takes time to listen," she says. "It's not easy – he's there to be shot at!"

I leave the final word to Reuben when I ask how he thinks we should attract more young people to point-to-pointing. "More people like Teresa," he replies succinctly. "She makes it fun." 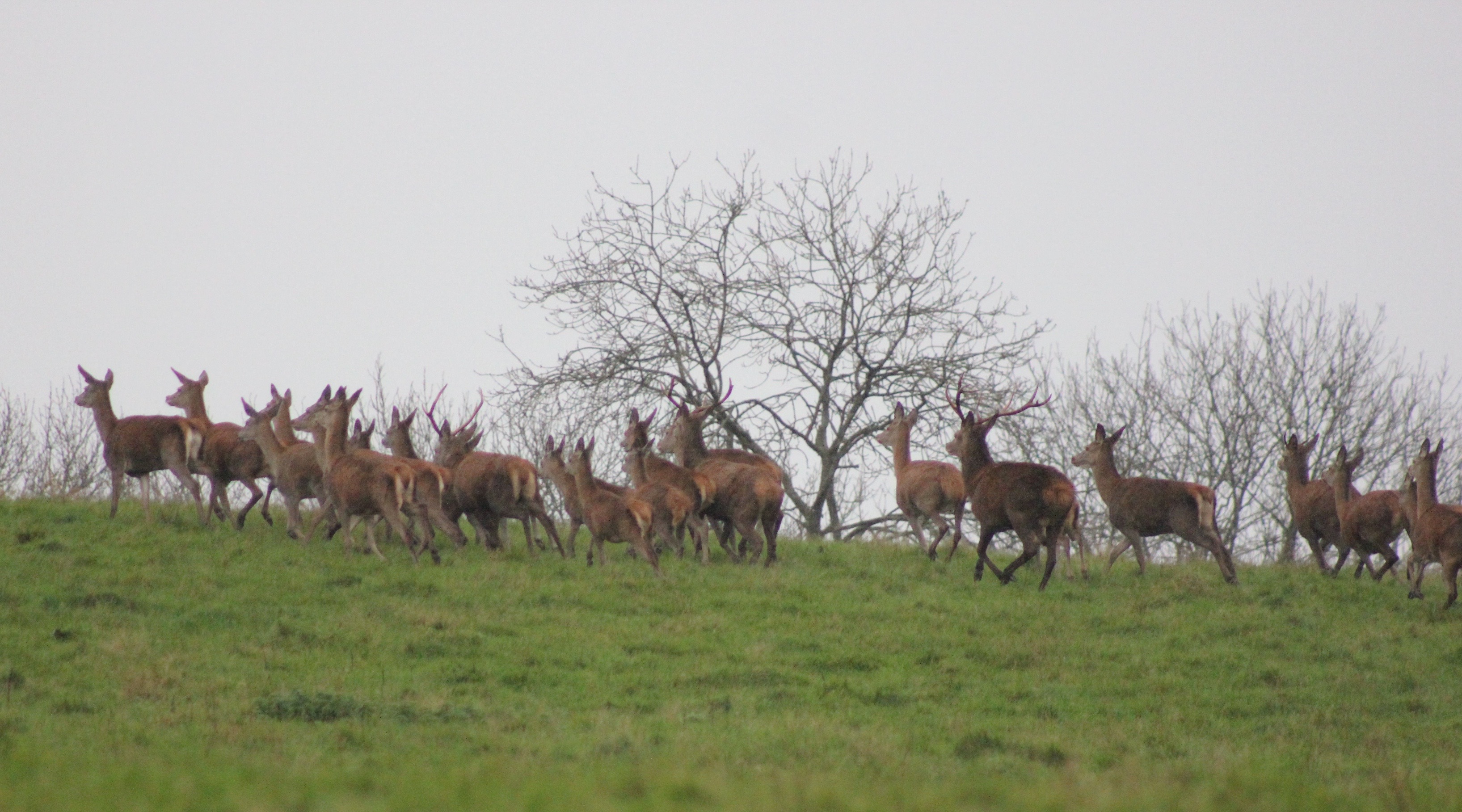 A cheap, fun horse. No world-beater but he loves the job and his jumping's got better. All he has to do is what he did last year (he won twice and was placed on all his starts. He'll run locally and we'll target the Quantock Members race. Loves his hunting.

Ran for Peter Bowen under rules and had a case of seconditis! She's come into the yard late so will have a couple of pointing runs before going summer jumping. Could be a fun horse.

Owned by the Notre Cheval partnership, run by vet Phil Brown, and bought as a fun horse. She ran a lot in Ireland and wasn't disgraced, but doesn't have many miles on the clock. She's bloomed since I got her and is a little pocket rocket. I love her attitude – when she first went hunting she was a bit fiery – she's like Tuff Nano in that respect. She'll start after Christmas and wouldn't want too much cut.

She's just turned seven and Will (Biddick) and I still think she's green (as her antics proved) and needs more experience. The plan is to use her mares allowance in Conditions races and hope she can build on last season and progress further. I'm fortunate in that her owner Peter Gwyn, is patient.

Since I visited, Tuff Nano's full sister – owned by Mike and Naomi Roe, who have been with Teresa since the early days – has joined the team. Teresa also has two unraced and unnamed youngsters, a three-year-old by Native Ruler and a Bollin Eric four-year-old. "They're both big, backward babies and – though it pains me to say it – they'll probably run in a point-to-point flat race. I'm not a fan, but we have to move with the times."